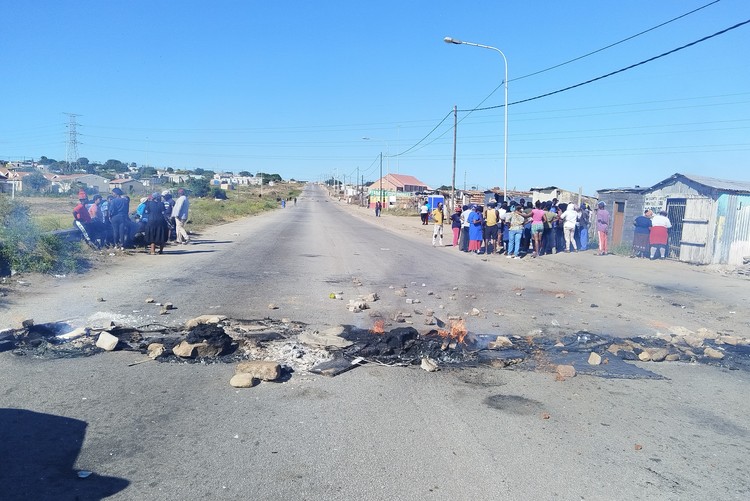 About 100 residents from Govan Mbeki Village informal settlement blocked the R75 Uitenhage Road in Gqeberha with burning tyres and rocks on Monday morning. They were demanding the municipality give them more standpipes and an electricity transformer, and that it clean the communal toilets in the area.

Residents say the toilets have not been cleaned for several days.

On Monday, the protesters, mostly women, demanded that Ward 33 Councillor Mzwandile Sidina (ANC) come and address them. They said the company contracted to clean the toilets did not do so last Tuesday because it had not been paid by the municipality.

The informal settlement was established in 2017 by backyarders from Govan Mbeki, Veeplaas, Kleinskool and Soweto-on-Sea. The community has been disrupted by in-fighting over illegal electricity connections.

Jazz Nantu, a community leader, told GroundUp that at a public meeting on Friday residents took the decision to protest. “We became very angry on Tuesday when a private company that cleans these toilets told us it has not been paid for months by the municipality. It decided to terminate its services until it gets its money.”

Nantu said that about 700 shacks share just ten portable toilets, which are all full and dirty. “We have been asking for more toilets, but the municipality has done nothing. We have four standpipes but only two are working. In the mornings and afternoons, there is always a long queue for water.”

Nantu said they also want clarity from the ward councillor on whether or not the informal settlement is recognised by the municipality.

Nompikiso Maneli, who works as a toilet cleaner, said, “I have been cleaning these toilets since May. But on Tuesday the company said we must stop working because it has no money to pay us. We will return to work once the municipality pays the company.”

Councillor Sidina did meet with the residents. He promised to raise their demands with the relevant City departments. He confirmed that the community was promised a transformer a week ago, but he said the municipality did not currently have one to give them.

“I have spoken to the cleaning company, and it promised to come and clean the toilets. Regarding the status of the informal settlement, I will take the issue up with the Department of Human Settlement,” he said.