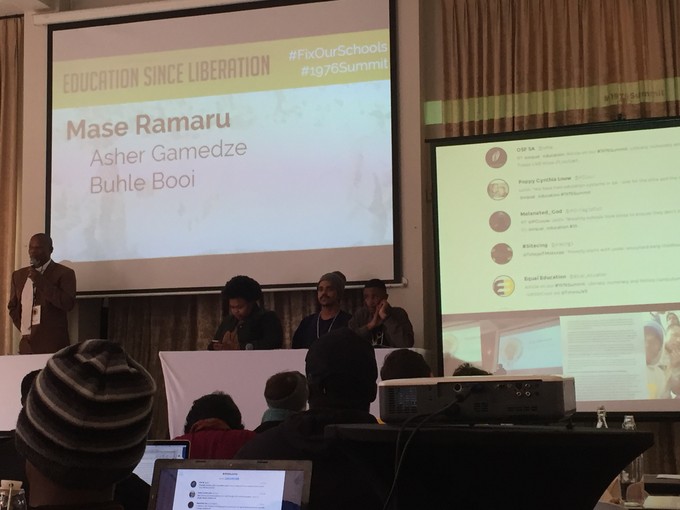 Day one of the Equal Education (EE) summit in Johannesburg wrapped up yesterday evening. The four panels looked at the continuing legacy of apartheid and its effects on the current education system.

The first panel, titled “Education since Liberation” sought to identify inequalities in the current education system that were part of the legacy of apartheid. One of the main discussion points was the diminished role and incorrect focus of history. Multiple panellists and audience members found it extremely disheartening to see students reject history because of a belief that it had no relevance or economic benefit. The panel called for more of a focus on Africanist history, so students would be able to connect to their roots and better understand history’s relevance.

Vigorous debated ensued during the second panel, which discussed parallels between current student movements and the student uprising of 1976. One of the panellist members, Professor Noor Nieftagodien, outlined the current generational split between the ’76 generation and student activists of today. During questions students and principals seemed to highlight that split by disagreeing over whether current movements, like #FeesMustFall, were worthy successors to the Soweto Struggle.

The third panel was a presentation on how South Africa could move from a Bantu education to a truly decolonised education. The theme of decolonisation had come up throughout the day, with activists and students demanding an education that was truly relevant to them. One panellist noted that even though formal segregation had ended with apartheid, there were still three tiers of schools with vastly different success rates for students. Additionally, panellists noted that the presence of language barriers, teacher attendance, and early learning all contributed to a fundamentally unequal education society.

The fourth and final panel of the day featured a student, teacher, lawyer, EE activist, and a Gauteng provincial legislator. Grade 11 student Londokuhle Mnguni listed multiple ways in which her education system was failing her, from a lack of transportation, sanitation facilities, textbooks, to poor quality teachers. To thunderous applause she told the audience “it is through gentle words and peaceful protests that we will make our concerns known.”

Most of the audience questions were directed at provincial legislator Joe Mpisi who chairs the education subcommittee. He responded to concerns over corruption in school governing boards by highlighting examples of how Gauteng was cracking down on corrupt school officials. In response to a question on whether the ruling government was fostering equality between provinces, Mpisi listed a series inter-provincial agreements and meetings between all provincial portfolio ministers that were meant to promote equality and cooperative governance.

Through all the discussion, the first day was imbued with a very festive spirit. Between the panels, delegates came together to sing and dance in their hope to bring equality to the education system. Tomorrow, they will all be tasked with coming up with a charter that captures all the diverse proposals that have been discussed so far.