Fees Must Fall: 46 arrests so far in East London 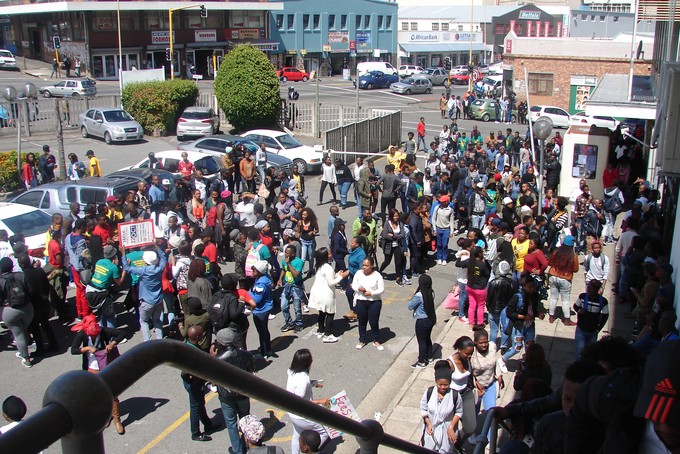 Forty-six people have been arrested in the last month following protests at campuses in East London. Photo: Siphokazi Vuso

So far 46 protesters have been arrested following Fees Must Fall protests by Fort Hare and Walter Sisulu (WSU) university students in East London this month.

The most recent arrest occurred on Tuesday at one of the WSU residences, when 13 protesters were arrested after tyres were burned, roads were blocked and stones were thrown in East London city centre. Police dispersed the crowd with rubber bullets and stun grenades.

Student leaders told GroundUp that of the arrested protesters, 11 were WSU students, one was a former student and one a high school learner.

According to WSU management, the protesters have been charged with damage to property.

Another WSU student was arrested on Monday and charged with damage to property. He was released on a warning, and his case was postponed until November.

Thirty-two students from Fort Hare University were arrested on 11 October and charged with public violence. They appeared on 13 October at the East London Magistrates Court. All were released on a warning and will appear on 18 November.

Fort Hare students went back to class this week but WSU students are still staying away from classes.

WSU student leader Vuyo Pakana said, “We are not going to back down even if we get arrested. We are not potential criminals, we are fighting for our rights.”

University management spokesperson Yonela Tukwayo said the university could not do anything for students who had broken the law.

“Students are breaking the law in a public space. The university and its management can do nothing to assist them,” she said.