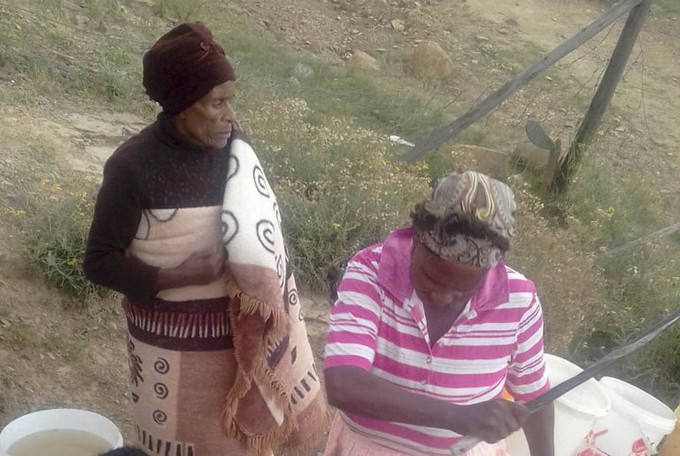 Villagers at Mhlotsheni village near Mount Frere in the Eastern Cape are drinking and washing in muddy water as their only stream dries up.

The small Rhontsana stream, which feeds the Umzimvubu River and serves as a main source of water for more than 300 households, has been drying up since July last year following severe drought in the district of Alfred Nzo.

In the mornings villagers wake early to queue for a little water at a small pond supplied by the stream. Sometimes a fight breaks out over access to the water.

Thandiwe Nogwaji, 64, said villagers had waited for years to get access to piped water, but though a reservoir was being built it was not ready yet and villagers had to drink the brownish river water.

“We have been relying on this stream for years, it is only now that it is drying up, causing a lot of stress to many of us,” said Mambele Mazwana, 56. “There is nowhere else we can get water from. We are forced to rush here every morning and evening to fetch water because we cannot get even a drop during the day. Our livestock is also depending on this stream and very little water gets to our pond.”

She said while the reservoir was being built the municipality should provide water tanks or deliver water with trucks.

The project would be completed by the end of this year, he said.

Asked what would be done for the villagers in the meantime, Masumpa said the main focus was providing long-term solutions to make clean running water available to all the communities in the area.