We shouldn’t shift vaccines away from the elderly

Less than 40% of people over 60 have been vaccinated

By Nicoli Nattrass and Jeremy Seekings 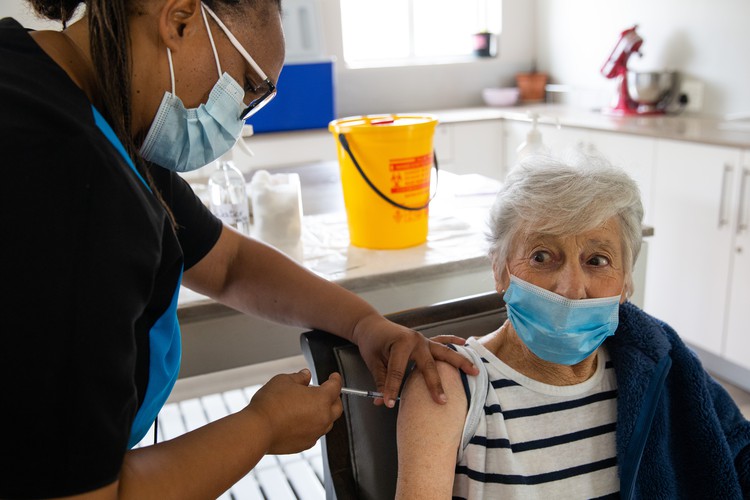 The government’s shift to vaccinating non-elderly people is distracting attention from its continuing inefficiency in reaching those most in need of the vaccine.

‘Phase 2’ of South Africa’s vaccination programme started in mid-May. According to the National Department of Health the elderly — people over 60 — were to be vaccinated in ‘Phase 2A’. Non-elderly frontline workers, prisoners and other people in ‘congregate’ institutions and people with co-morbidities would then be vaccinated under ‘Phase 2B’. The National Department indicated that it expected to shift from Phase 2A to Phase 2B at the end of June. This prioritisation of the elderly reflected scientific considerations about vulnerability.

The shift from Phase 2A to Phase 2B did not require that every elderly person be vaccinated. The proposal was that Phase 2B should commence when the vaccination rate among the elderly reached 70%.

The government has abandoned this sequencing between Phases 2A and 2B even though less than 40% of the elderly have been vaccinated.

First, government ministers announced that non-elderly essential workers would be vaccinated, starting with teachers last week. Then the Acting Minister of Health announced that vaccinations of people aged 50 to 59 would begin on 15 July.

There is widespread support for vaccinating some non-elderly people, even if the government’s decisions on who to prioritise seem to be driven by political rather than scientific considerations. But the government’s slow progress in vaccinating the elderly population is a massive cause of concern. 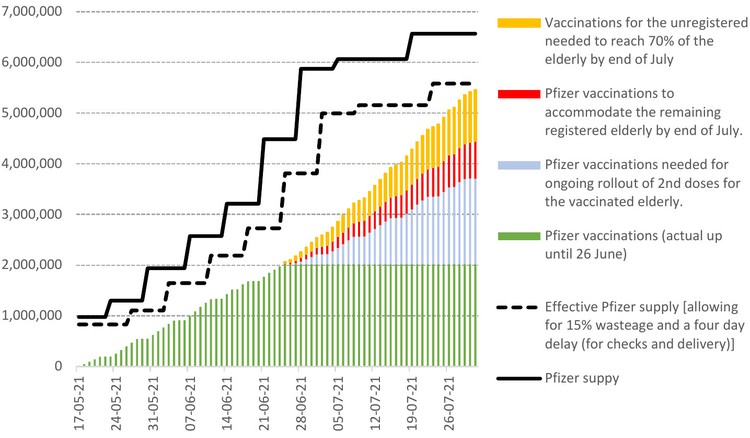 This graph, constructed by the authors based on data provided by government, shows the supply and usage of vaccines in South Africa.

There are about 5.3 million elderly South Africans, of whom only about 2 million had received their first shots of the Pfizer vaccine (as of 26 June). A further 700,000 have registered but are still waiting to be vaccinated. To vaccinate 70% of the elderly by the end of July – one month later than the original target – we would need to vaccinate all the registered elderly and about one million of the currently unregistered elderly.

If none of the Johnson and Johnson vaccine is allocated for the national rollout for those aged 60 and above, then we do not have enough Pfizer vaccine available in July to start vaccinating those aged 50 and above without rationing the vaccine away from the elderly.

The graph shows that much of the available supply of Pfizer vaccine in July is needed for the second dose Pfizer vaccinations that are due to start this week (with a six week gap between first and second doses). The blue bar shows the number of vaccines that will be needed in July for second doses.

The red bar shows the vaccines needed to provide first doses to those elderly who have registered, but not yet been vaccinated, by the end of July.

The orange bar represents vaccines needed to reach enough of the unregistered elderly to meet the target of vaccinating 70% of the elderly.

Hitting these targets will use up in July all the Pfizer vaccines that the Acting Minister said would be delivered.

If the elderly really are a priority, then the solution is to channel some of the Johnson and Johnson vaccines away from relatively healthy younger workers to the national programme, ideally to vaccinate the elderly in rural areas. This would free up some Pfizer vaccines for people aged 50 plus in urban areas.

Professor Nattrass and Professor Seekings are based at UCT.