Disabled man cleans his street from his wheelchair 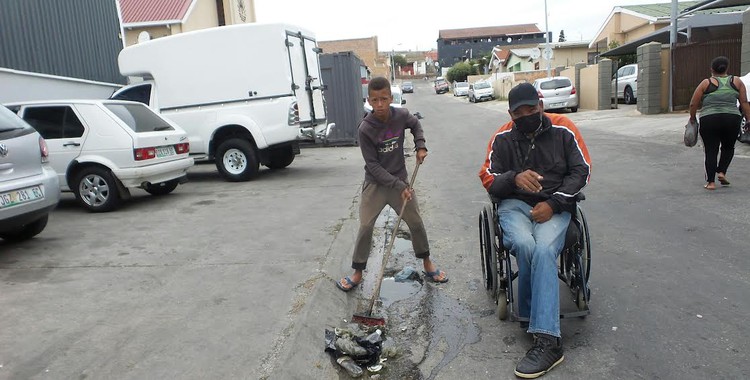 John Martin and Shiloh Felix go out together to collect rubbish in their street in Gqeberha. Photo: Joseph Chirume

John Martin is a familiar sight in the streets of Kostern, Gqeberha, moving along in his wheelchair, collecting the rubbish left by others.

Martin, 65, lives at his cousin’s house with the son of a friend, Shiloh Felix, 13. The two are a common sight in Kostern as they go around picking up rubbish in Malan Street.

They put the rubbish in plastic bags and take it to the municipal collection point.

Martin’s back was injured when he was 14 during a game with a friend in a park. “I grew up with the injury but I managed to work as a driver. The injury only became serious ten years ago; that’s when I became disabled,” said Martin.

He wants to motivate able-bodied people to do what he does and clean their streets. When Shiloh is at school, Martin goes around alone.

“The rubbish ends up polluting surrounding streets, while plastics and solid objects choke manholes resulting in sewer blockages. Something needs to be done because the situation is getting out of hand.”

“I grew up in Malan Street. The place used to be very clean.”

Martin says Kostern has grown over the last ten years with many shops opening. Residents and shop owners put their garbage in nearby Durban Road for collection by the municipal refuse truck but much of it blows into other streets, he says.

Martin buys the plastic bags using money from his old age social grant. He said he wants Shiloh to follow in his footsteps and continue cleaning their street.

Shiloh, who is doing grade 7, said Martin was teaching him to “be responsible in life”.

“I am glad to move around with Martin,” he said.

Ward 11 councillor, Graham Gelderbloem said, “The municipal truck cleans the area three times a day but more rubbish keeps getting dumped. There is a need to change people’s mindsets.”

“I wish I could get funding so that unemployed people could open recycling businesses, because there is a lot of waste that could be utilised by residents,” Gelderbloem said.