Mayor will have final say on giant development 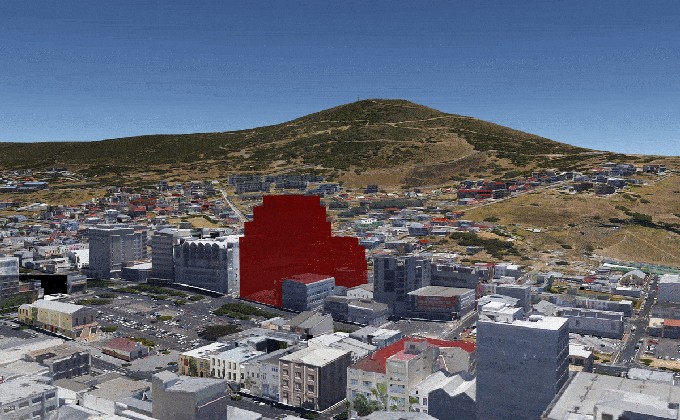 The proposed development with the Bo-Kaap neighborhood and Signal Hill behind it. Image: Bridges Not Barriers’ website

The Bridges not Barriers campaign is planning to appeal a decision by the City Municipal Planning Tribunal to approve a 19-storey development, which it says will cut off the views of Bo-Kaap and further divide the neighbourhood from the city. Residents are particularly worried about the precedent it will set for other developments in Bo-Kaap.

Once the tribunal has released its official report, the campaign will have 21 days to submit their appeal to the mayor.

The campaign was started by the Bo-Kaap Civic and Ratepayers Association, which argues that the development follows the logic of apartheid planning, creating a buffer zone that divides communities.

Building will have businesses and apartments

The proposed development is on a city block above Buitengracht Street and bounded by Longmarket, Shortmarket, and Rose streets. At 19 storeys and 60 metres tall, the building would be significantly higher than the buildings in the immediate vicinity.

The development, designed by Fabian Architects, would be mixed-use commercial and residential space. Businesses would be located on the ground, first, and second floors, with 249 apartments above. An underground parking garage will be excavated to provide parking space for 300 vehicles.

Buitengracht Properties acquired the land in 2015. Originally, a slightly larger building was planned, but after initial objections from residents, the developers changed their design to step the side of the building facing towards the Bo Kaap on Rose Street to better integrate it with the one and two-storey structures there.

The Bo-Kaap is known for its brightly coloured houses, cobble-stoned streets, and vibrant culture. It is currently in the process of being designated as a Heritage Overlay Zone, which would mean increased protection on heritage grounds, though it has not yet been declared one.

Objections came from hundreds of current residents, businesses and community members in the area. One resident, Zaid Philander, wrote in his objection, ‘Bo-Kaap is [a] heritage ground and it is already enough that residents are being pushed out due to gentrification and high rates. We need to have an inclusive community that builds the community up and not gentrify them due to major conglomerates.’

Faheem Abrahams, a lifelong resident, wrote, ‘Bo-Kaap is so rich in culture, tradition, history, character and archaic poise … Developers should rethink their plans and put aside their own personal gains and actually take into consideration how this all affects the people of Bo-Kaap and Bo-Kaap itself.’

The Bridges Not Barriers campaign says that the building will be hopelessly out of place, would wall off views of Bo-Kaap and the city, and pose serious privacy concerns for lower lying residences directly adjacent to it.

Heritage Western Cape (HWC), an official provincial authority that opposes the development but acts only in an advisory capacity, also believes the development will cause ‘visual clutter’, is ‘out of character with the area’ and ‘will exacerbate the separation of the Bo-Kaap from the CBD’.

The tribunal’s report acknowledged 1,017 objections, 636 from the campaign website. The report accepts that there will be negative impacts on property values, higher density and increased traffic. However, it found no grounds to rule against the property owner’s plans.

The Streetwire Artist Collective refused to sell their space to the developers. As a result, the proposed development will encompass the rest of the block towering over the Streetwire office.

In an interview on 11 February, with the Cape Argus, owner Cecily Blumberg expressed fears that construction would impact the stability of her building, as well as disrupt the heritage of the area.

In June 2015, the City implemented the Municipal Planning Tribunal system which is meant to efficiently, transparently, and publicly decide on development applications. The tribunal is composed of private experts and city officials with experience in urban planning and development. It can approve or deny applications on the basis of various planning frameworks such as the municipal planning by-laws, spatial development framework, urban design policy, and the City’s densification policy.

Section 99(3) of the bylaws give the tribunal the authority to consider an application on the impact it may have on the surrounding economy, social fabric, heritage, biophysical environment, and traffic. Bridges Not Barriers had urged the tribunal to rule against the development on all of these factors in addition to its concerns that the development would further gentrify the Bo-Kaap and exacerbate inequality.

There have been previous allegations that the tribunal favours developers over residents. Before the tribunal system, applications and objections to development would be decided through the sub-council system.

The chairman of the campaign, Osman Shaboodien, says that the developers never reached out to concerned residents. He also said that the tribunal system is flawed as it rushes through the process and disregards heritage concerns. In his view, the tribunal should have heritage experts as members.

Councillor Dave Bryant, the ward councillor for the development area and Bo Kaap, appeared on Cape Talk to discuss the proposed development. While he is not a member of the tribunal, he said that it favoured the developer over all the objections because it could not find any legislative standing to prevent their right to develop their property.

Shaboodien says that his organisation will appeal the ruling. Then, the final decision will rest with Cape Town Executive Mayor Patricia de Lille, who must decide on the appeal after consultation with her advisory board.