A crèche battles to survive after cops fail to pitch

Teachers say they fear for their and the children’s safety 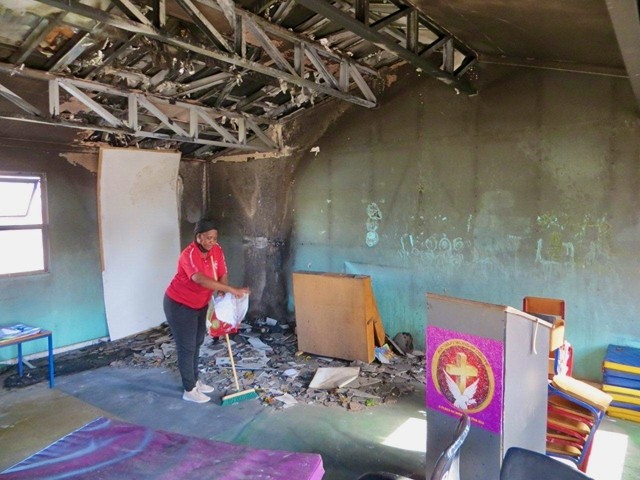 Joyce Sonkononkolo cleaning up the debris left by robbers and a fire at the at Blessings Educare in Symphony Way, Delft, Cape Town. Photo: Vincent Lali

Back-to-back burglaries and a fire at Blessings Educare in Symphony Way, Delft, have left teachers at the crèche fearing for their safety.

Fire and Rescue Service spokesperson Jermaine Carelse confirmed that a call was received at 5:32am on 7 June and that emergency personnel responded.

“The criminals ripped electrical cables off the walls and stole an electrical lamp,” said Deyizana.

After the burglary on Tuesday, Deyizana and the caretaker found the hole in the fence where the thieves had entered. “We didn’t interfere with the crime scene and phoned the Delft police, but they never showed up,” she said.

“We waited for the police to come and examine the crime scene until we gave up on Tuesday and the caretaker decided to fix the hole in the fence himself.”

But on Wednesday night, the thieves reopened the hole and targeted another classroom, making off with toiletries, teaching equipment, six small mattresses, two tables, and 11 chairs.

“If the police had come to look into the crime scene and patrolled around here, the thugs would have been deterred from returning to burgle and steal again here,” she said.

A resident then spotted youths with a trolley carting off what looked like school equipment and alerted the Delft police.

Sergeant Wesley Twigg of SAPS Western Cape Media Centre confirmed that two suspects, aged 27 and 28, were arrested for the possession of presumed stolen property and arson. The suspects made their court appearance in the Bellville Magistrates court on Thursday. The investigation into the matter continues, he said.

Twigg did not comment on the failure of the police to arrive after the Tuesday burglary.

“We can’t give the learners age-appropriate lessons when they are mixed in one classroom,” she said.

“We as teachers are afraid because we don’t know what will happen to us and the kids. We don’t feel safe here anymore.”

“Even the caretaker is scared to sleep here because he doesn’t know how he will defend himself against the criminals,” she said.

Deyizana said numbers at the crèche has dropped from over 60 to 30.

“Parents seem to be pulling them out because they fear for their safety,” she said.

Most of the parents are factory, construction or domestic workers.

“We want the police to … help us get the stolen property back,” she said. “We have not been updated on the police investigation into the burglaries, thefts and arson. We don’t even know the name of the investigator.”

“I use baby wipes to clean the kids’ faces and apply Vaseline before they go home every day. Parents don’t have money to buy other baby wipes and Vaseline again before month end,” she said.

“We don’t have money to repair the crèche,” she said. “We wish a Good Samaritan could give us learning equipment and blankets so we can resume teaching.”

Zandile Jalamba, whose two kids attend Grade R and Pre-Grade R, said, “The thugs first burgled and burned the crèche and then returned to steal. We fear for the safety of our kids because we don’t know what they will do next.”

She said the crèche was well located and “the teachers look after kids, feed them well and charge affordable fees”.