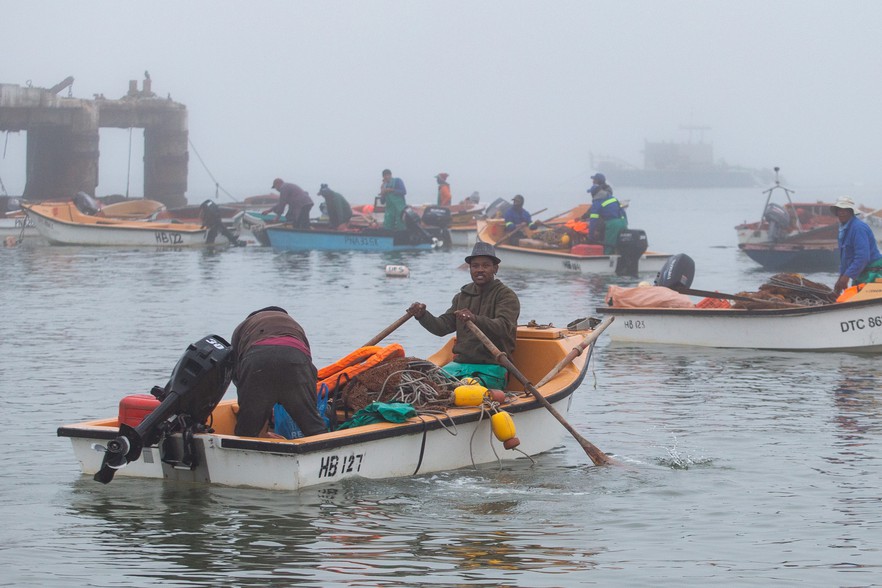 Fishers in Port Nolloth leave in the early morning to catch crayfish.

The Department of Forestry, Fisheries and the Environment has given in to the demands of small fishers and increased the crayfish quota for the 2021-22 season. But for the next two years, the quota will be cut again.

Fishers from as far as Port Nolloth protested in front of Parliament in October after the department announced a 28% reduction in the quota for the next season. Minister Barbara Creecy agreed then to review the quota.

On Monday the department announced that it had accepted a report by the Consultative Advisory Forum (CAF) appointed to advise on the West Coast Rock Lobster fishery. The report recommended that the total allowable catch be increased from the present 600 tons to 700 tons for the 2021-22 season, “given the dire socio-economic conditions of fishers reliant on [crayfish] for their livelihood”.

But, the forum recommended that the quota then be decreased to 550 tons in the next season and to 400 in the season after that to curb the decline in the crayfish stock.

The West Coast Rock Lobster, caught on the coasts of the Western Cape and Northern Cape, was red-listed in 2016, which means that the species has very depleted stock levels and future stocks may be wiped out.

As a result, quotas have been decreasing, leaving fishers in Port Nolloth battling for years.

Port Nolloth set up a co-operative in 2018, after a change to the Marine Living Resources Act affecting small-scale fishers. About 103 people, all of them from the Port Nolloth and Hondeklip Bay co-operatives, were declared small-scale fishers in the Northern Cape in terms of the Act, with rights to fish for 15 years. But since then, the total allowable catch of crayfish has decreased every year. 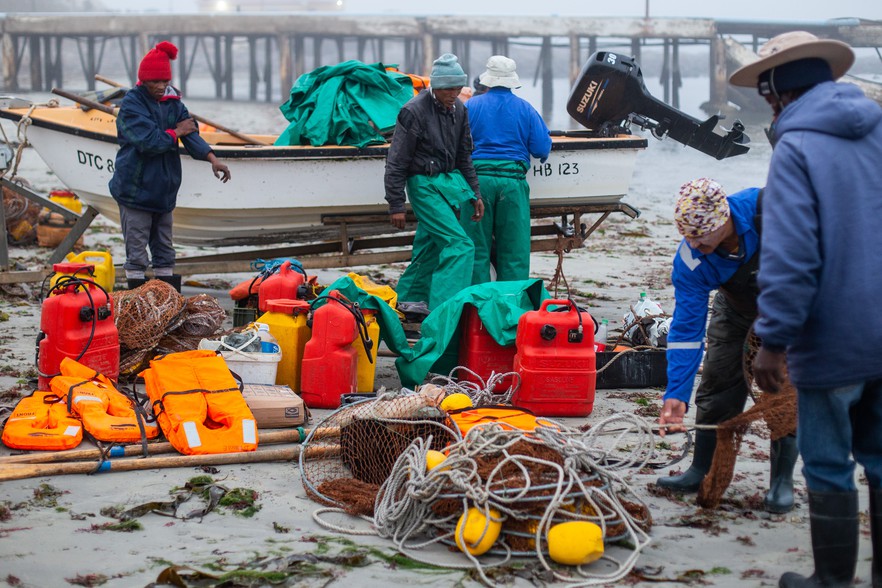 Small-scale fishers in Port Nolloth harbour prepare their equipment before heading out to sea.

Juliana Rooi, one of the only fisherwomen in Port Nolloth, has been fishing for over 20 years.

“I was twelve when I began catching crayfish with a net on the rocks, with my uncle and my cousin,” she told GroundUp on the harbour at Port Nolloth. She had just been helping some fishers offload equipment and drag their boats across the beach into the water. 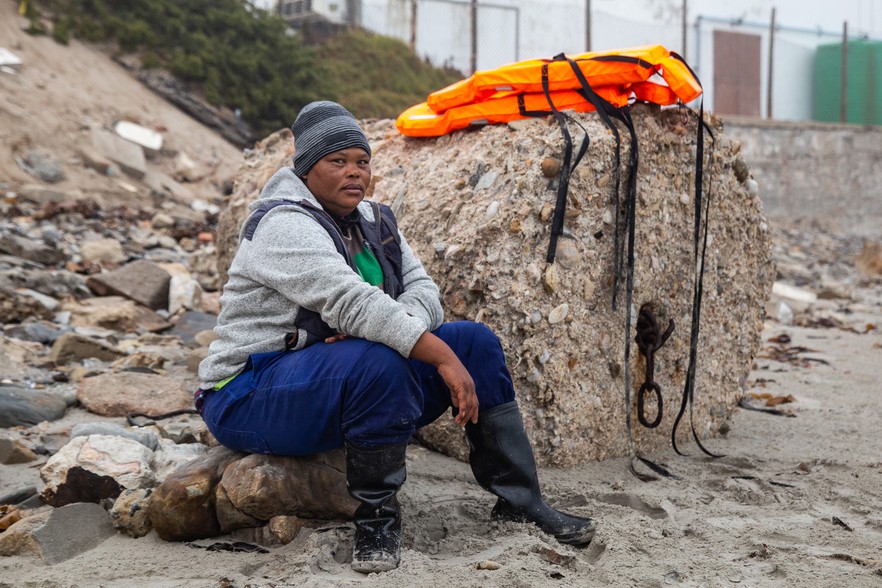 Juliana Rooi is the only woman in Port Nolloth who goes out to sea to fish. ​​“I am acknowledged by the fishermen as a fisherwoman … They respect me as the only woman currently going to sea,” she said.

When the weather permits it, the fishers go out to sea at about 4am in the morning and return after 2pm. They catch crayfish when it’s in season, between October and February, and when the season closes, they catch fish, like snoek.

Rooi said the fishers had been struggling with the annual cuts to the crayfish quota. “What you give you can’t take back. It doesn’t work like that.” 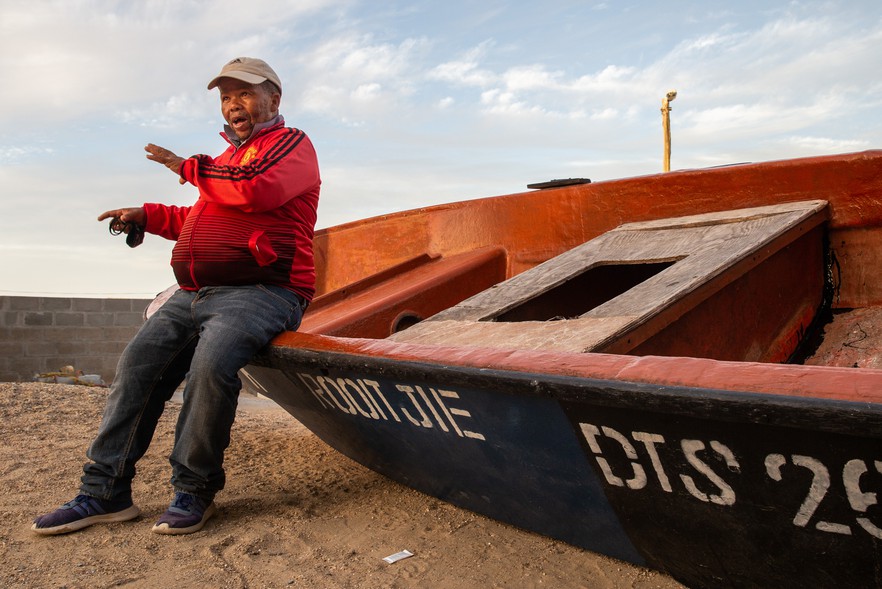 Petrus Rooi showed GroundUp the fishing boat in which he had an accident in 2018. One of the men with him drowned when the boat capsized, and he lost all of his equipment to the sea.

Petrus Rooi, who taught Juliana how to fish, said that often during his life he had no choice but to go work on the nearby diamond mines when he couldn’t catch crayfish anymore. “Over the years, things have become very difficult … After you get your quota out of the water, there isn’t an income anymore. You have nothing more to do,” said Petrus.

Petrus said that he would still go work on the mine though it was dangerous. “Just to make a living. To support your family. You have no other choice,” he said. 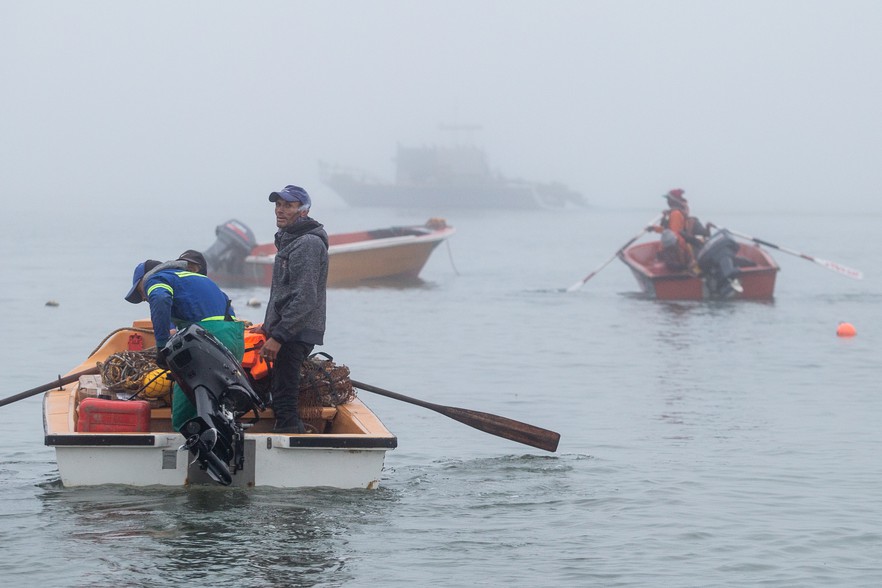 When the mist is thick, a fog horn rings out from the coast from early morning until the fishers come back, to signal where land is. The siren can be heard throughout Port Nolloth during the day.

Walter Steenkamp, who has been a fisher for 35 years, said that for a few years, fishers in Port Nolloth had struggled because the crayfish were small. For one season, fishers had agreed to catch less than their quota. “It was a good effort from our side. It allowed the crayfish to get stronger and bigger,” said Steenkamp.

This season, he said, there have been fewer crayfish than usual. 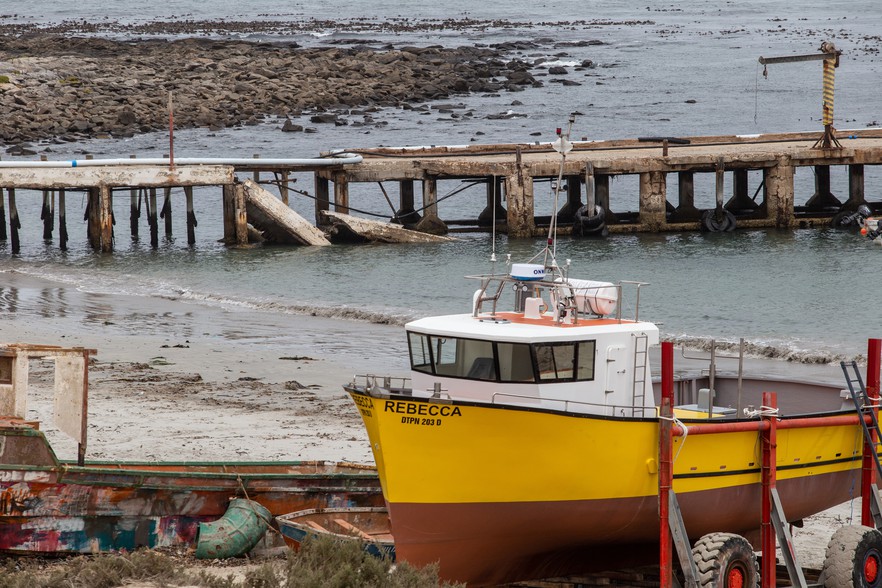 The dilapidated jetty, which collapsed a few weeks ago, from which the fishers go out to sea. Fisher Walter Steenkamp said, “In the mornings you go to sea wet and in the afternoon it’s the same.”

When Rooi’s 15 years of fishing rights are over, she will apply again, she says.

“We go on. It’s our lives. We live from the seawater; it’s our bread and butter.”

Recommendations to the department

The Consultative Advisory Forum (CAF), which consists of fishing community representatives, was appointed by Minister Barbara Creecy to advise her on fishing of the West Coast Rock Lobster. The forum was asked to consider the methodology used to determine the total allowable catch, the cuts in quotas for commercial fishing, small fishers, and recreational fishers; and data on poaching. The forum was also asked to advise how fishing communities could help the department manage the stock.

After several meetings, the CAF made five recommendations, which were accepted by the Minister: