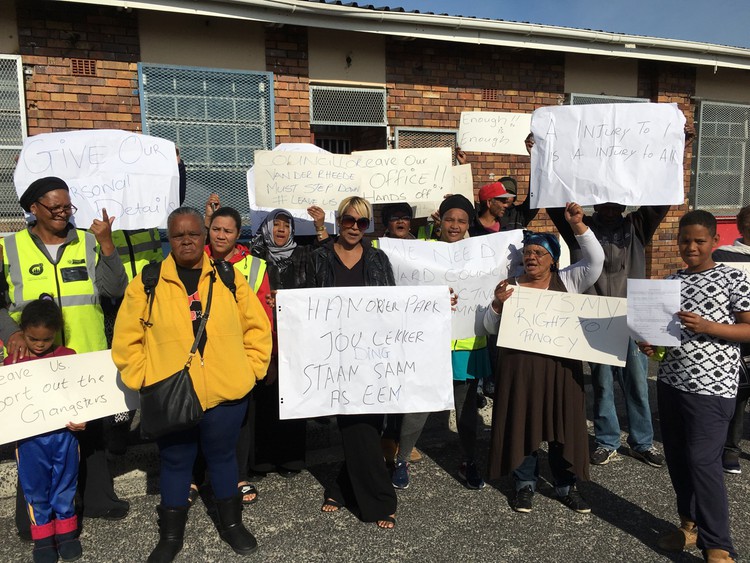 On Tuesday more than a dozen protesters, most of them women, gathered outside the Hanover Park Community Centre. They held signs reading “Councillor van der Rheede must step down” and chanted “Give us our office back”.

Chairperson for the Women’s Forum Muriel George said that on Friday at 1:30pm facility caretakers told the women they had to vacate their offices by the next day, and this was on the orders of ward councillor Antonio van der Rheede.

No official documentation was presented to them, they say.

The women showed up at the centre on Monday as usual. But when they returned from their lunch break, they found the doors chained shut. Their personal documents and computers were still inside and elderly women from the community were also locked outside on the street, a street which sits directly between two rival gang territories and is considered highly unsafe.

Hanover’s elderly women have been using the halls as a gathering place to socialise, discuss, and air their frustrations about community issues for over 30 years, said George.

Mayco member for safety and security JP Smith said, “The City of Cape Town’s Recreations and Parks Department’s new area manager has initiated a process to regularise the use of community facilities in the area.”

He said the evictions occurred due to lack of a formal agreement for leasing the space from the Council, and that registered NGOs and accredited organisations would have “the opportunity to submit business plans and proposals should they wish to be based at a Council owned facility”.

He said affected spaces were notified of the eviction on 27 June and given 30 days to vacate.

Van der Reede said it was “an administrative process over which I as a councillor have no power or influence. The regularisation of community facilities will be to the benefit of the thousands of residents in my ward.”

But the Hanover Park Women’s Forum said, “The councillor wants to take over the facility for people he has employed so he can implement the programmes he wants with the people he wants to work with.”

“But he has to work with everyone,” said Vainola Makan, an activist with the Right2Know Campaign.

George said they had invited the Councillor to engage with them “about 20 times”, but he has yet to hold a single open community meeting.

Van der Rheede said he “rejects the allegations made against me and call on the Women’s Forum to follow proper channels to raise concerns about my conduct.”