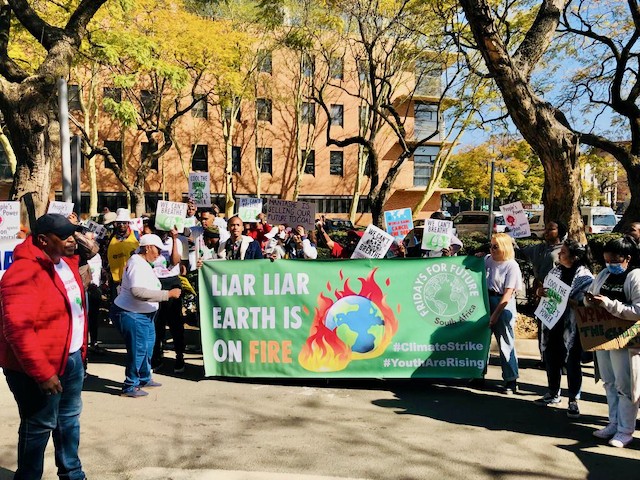 On Monday, about 100 people marched to the Department of Energy in Tshwane and then to the office of President Cyril Ramaphosa at the Union Buildings. Photo: Kimberly Mutandiro

About 100 people marched to the Department of Energy in Tshwane and then to the office of President Cyril Ramaphosa at the Union Buildings on Monday.

The march was led by the Climate Justice Coalition and supported by various organisations, including Mining Affected Communities, General Industries Workers Union of South Africa (GIWUSA), African Climate Alliance, the Soweto Electricity Crisis Committee, the Workers and Socialist Party and the Koeberg Alert Alliance. Also present were people from townships across Gauteng fed up with load shedding and the high cost of electricity, fuel and paraffin.

They handed over a petition with 150 signatories demanding energy and climate justice. Central to the list of demands is that the President implement an emergency renewable energy plan to end load shedding, and that he fire energy minister Gwede Mantashe and fix his department.

The petition cites research suggesting that the country could solve load shedding by unlocking renewable energy as the fastest, cleanest and most affordable route.

The signatories accused Mantashe of delaying the transition to renewable energy and seeking to “lock South Africa into polluting and expensive coal, diesel and gas”.

The coalition secretary, Alex Lenferna, said Mantashe’s department wants “to prioritise the profits of polluting corporations over the well-being of people in communities” and is adding to the climate crisis.

Mametlwe Sebei, GIWUSA president, said, “Electricity has become unaffordable for the working class and many other people.”

He said engagements with the presidency and the energy department had been futile.

Gladys Dlamini, from Meadowlands in Soweto, who joined the march, said, “All our meat rots in the fridge and we do not have money to continue buying. We sleep and wake up with no electricity. They should give us solar panels.”

The memo was received by Adelaide Mashele from the President’s office. They were given two weeks to respond.