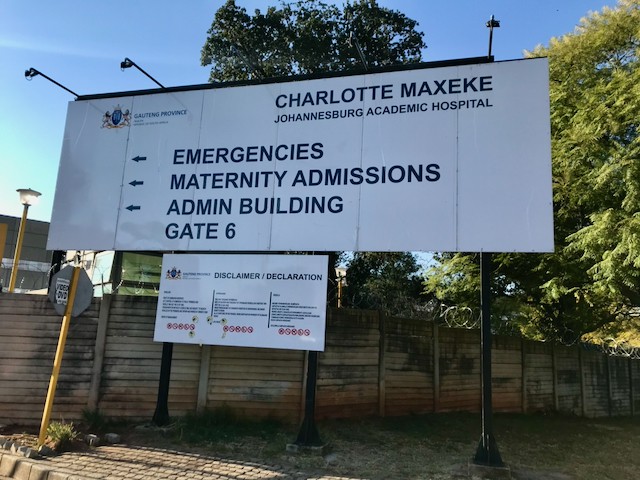 Charlotte Maxeke Johannesburg Academic Hospital has been closed since a fire broke out in April this year. Patients have had to seek treatment elsewhere. Photo: Masego Mafata

Many cancer outpatients at Charlotte Maxeke Johannesburg Academic Hospital have had their treatment interrupted and are struggling to access treatment. A fire broke out at Charlotte Maxeke Hospital in April, forcing the hospital to close. Since then patients have had to seek help at other hospitals, waiting in long queues, and running the risk of being turned away.

Chris Hani Baragwanath Academic Hospital is currently taking Charlotte Maxeke oncology outpatients on Wednesdays, Thursdays and Fridays. From as early as 6am, patients queue outside.

Dimakatso Motaung, who was receiving treatment for cervical cancer, says she has not been able to see a doctor or receive treatment since the hospital closed.

She went early on Wednesday to Baragwanath hoping she will receive the help she requires.

“It is my first time at this hospital and I am already tired. At Charlotte Maxeke we know where to go and who to speak to,” she said.

Another patient said, “My chemotherapy session was delayed by three weeks which was very concerning. But when I eventually heard where to go, I was very grateful to know that we were going to be helped.”

However, for Lindelwa Phakathi the delay in her treatment has been three months. She worries that her cancer is progressing.

“I haven’t had my treatment since March. It is the fourth time that I have come to Chris Hani hoping to receive treatment. They gave me an appointment for 16 July but I am getting worse. I am coughing and my lungs are painful,” she said.

Phakathi was scheduled to receive four cycles of chemotherapy to treat Hodgkins Lymphoma. She has only received one session.

Phakathi is unemployed and uses public transport to get to Baragwanath, which is about 40km from where she lives. “I don’t have money to be running around like this, but I need the treatment. I have a four-year-old son. What will happen to him if I don’t survive?” she asked, tearfully.

“They [Charlotte Maxeke] were supposed to call us from the moment the hospital closed,” she complained. She says she gets updates on the status of the hospital by listening to the radio.

Another patient said she was never notified that the oncology unit is running from Baragwanath. “I heard from someone else that I must go to ‘Bara’ for treatment. When I arrived here, I was confused because I didn’t know if they had our files or if I had to open a new file,” she said.

Patients can spend most of a day in queues waiting to open files, before they are able to be seen by a doctor.

According to a staff member, patient files are still at Charlotte Maxeke and only the files of the patients with appointments on a particular day are delivered to Baragwanath. Patients should therefore only go to the hospital on their appointment date.

In his latest update on Charlotte Maxeke, spokesperson for the Gauteng government Thabo Masebe said he could not give a date for the reopening of the hospital. He has previously said the hospital’s oncology unit would open towards the end of the first week of June.

In the meanwhile, patients will have to keep trying their luck in the hope that they will get the life-saving treatment they need.