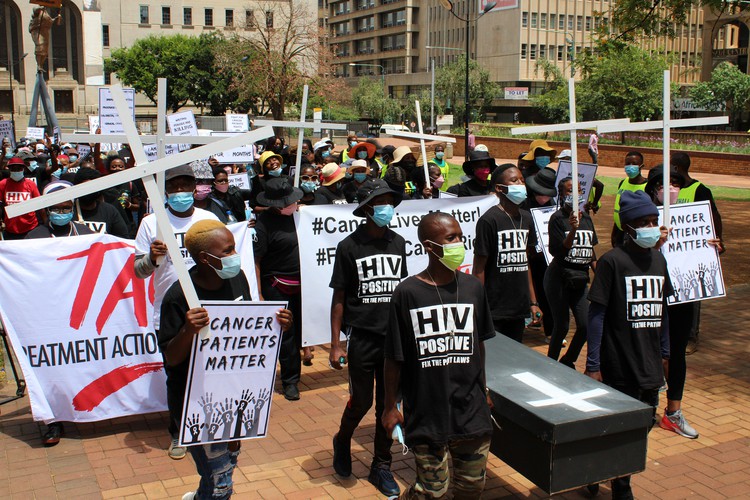 Health activists and cancer patients currently on long waiting lists for treatment march to Gauteng Premier David Makhura’s office, demanding that he address the cancer treatment crisis in the province. Marchers carried white crosses while some carried a coffin to symbolise cancer patients who have died while waiting for treatment. Photos: Masego Mafata

“Being on the waiting list [for cancer treatment] is very scary. You don’t know if you’re going to die. We are really losing hope,” says Zuziwe Mdlulwa.

Mdlulwa, a two-time breast cancer survivor, joined more than 100 health activists and cancer patients currently on waiting lists for treatment on Tuesday as they marched to Gauteng Premier David Makhura’s office in Newtown. They are demanding urgent intervention from government to address the “cancer crisis” in the province.

The march, organised by Cancer Alliance, SECTION27 and the Treatment Action Campaign (TAC), started at the Library Gardens where the group observed a moment of silence for people who have died while waiting to receive cancer treatment.

In a statement, the organisers said, “Certain cancer patients in the public sector in Gauteng can be forced to wait up to five years for potentially life-saving therapies. Many cancer patients, who cannot afford private sector treatment, are paying with their lives because of government’s delays.”

Salomé Meyer from Cancer Alliance said waiting lists and backlogs preventing access to cancer treatments have been an issue for years. She said backlogs have been incorrectly attributed to Covid and the fire that broke out at Charlotte Maxeke Johannesburg Academic Hospital earlier this year.

“In Gauteng, there are only two public hospitals offering radiation oncology: Steve Biko and Charlotte Maxeke. At Charlotte Maxeke, there are almost 2,000 people on waiting lists for radiotherapy, palliative care and other potentially life-saving therapies,” she said.

Mpho Manyedi from Germiston, who also joined the march, has been on the waiting list for radiation at Charlotte Maxeke hospital for 16 months.

“When you go to the hospital, they give you panados and tell you that you will be fine. A friend of mine died from cancer last month because of this poor treatment,” said a tearful Manyedi. 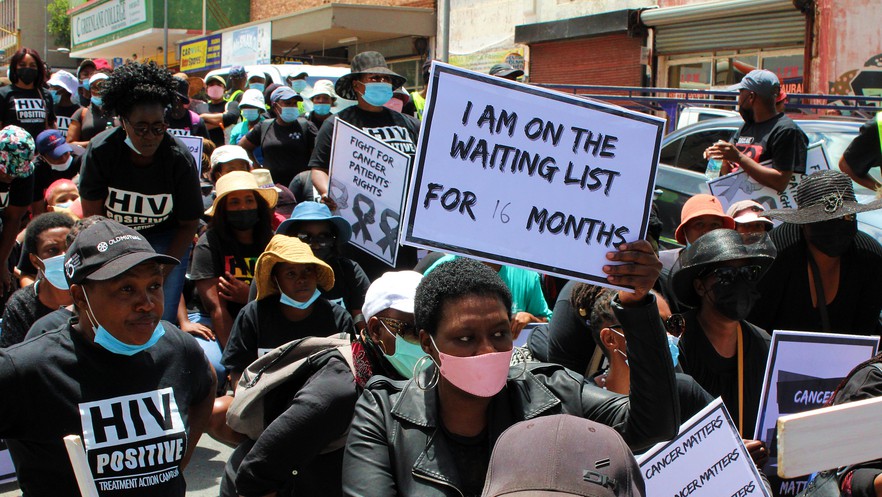 Mpho Manyedi from Germiston (wearing a pink mask) says she has been on the waiting list for radiation at Charlotte Maxeke hospital for 16 months.

Morgan Jordaan was diagnosed with skin cancer on 3 August at a local clinic in Germiston. She said that when she asked for blood tests, scans and a biopsy to confirm the diagnosis, she was put on a waiting list.

“I was initially told that it is an aggressive skin cancer that can spread to other organs. I wrote a letter to the Presidency and officials in October to complain about the waiting list. Only then was I given an appointment for my scans and tests. The tests revealed that I was misdiagnosed and that my cancer is not as aggressive,” she said. For four months now, Jordaan has been on the waiting list for a mammogram.

In a memorandum read out by Ouma Mamatela from Cancer Alliance, the group demanded that the provincial government and Health department publicly acknowledge that there is a cancer treatment crisis in Gauteng. They also want the establishment of a task team to advise and oversee the procurement of radiation equipment and services. They want the task team to develop a plan to be implemented no later than World Cancer Day on 4 February 2022. They also called for the provision of symptom management and palliative care to patients who require it while the backlog is addressed.

Gauteng Health MEC, Dr Nomathemba Mokgethi received the group’s memorandum on behalf of the premier. She promised they would try to respond by 10 December.

“My heart goes out to patients. As a department, we don’t want to put people on waiting lists forever. We are trying to make sure that we serve our people. We have launched the Soweto Comprehensive Cancer Centre at Chris Hani Baragwanath Hospital to improve access to cancer care for the Soweto community and surrounding areas,” she said.